Stay tuned and get our latest articles directly to your inbox. Enter your email address below:
Julien Brulland
Written by Julien Brulland On 15 October 2013 -
Uncategorized 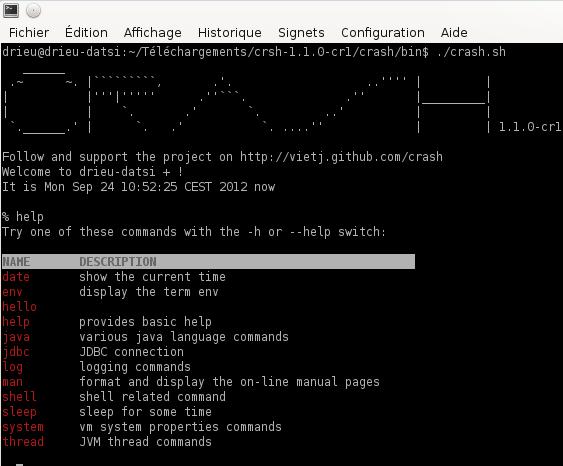 This post is an adaptation of an article originally written and published in French by Rieu Damien.

CRaSH: A shell to extend the Java Platform

This article introduces CRaSH through a case study and shows how you can easily work directly in the heart of the JVM. Have a good CRaSH!

CRaSH can connect to a JVM in shell mode and execute commands directly on the JVM. Thus, we’ll be able to access a number of predefined commands (such as thread, jdbc and java). If you want a quick overview of the available commands and their uses, they are available for testing on the CRaSH demo site.

One of the great strengths of CRaSH is that we can also define our own shell commands by programming them. It is then possible to carry out commands specific to our needs!

In this tutorial, we will present CRaSH through a use case. For this, we will create a CRaSH command to display a cache, then we will integrate this control into our application.

We’ll then see how to use this command with CRaSH.

The demo application was made with Spring. In this article, we’ll show how easy it is to integrate CRaSH into a Spring application.

To install CRaSH, download the CRaSH archive (www.crashub.org) and decompress it. Installation is not required if you use the ssh or telnet mode.

Once the war file is built, you just copy it to the JBoss deployment directory (${JBOSS_DIR}/standalone/deployments).

Warning: The demo app has been tested only on jboss-as-7.1.1.Final.

Here is the official definition of CRaSH:

The Common Reusable SHell (CRaSH) deploys in a Java runtime and interacts with the JVM. Commands are written in Groovy and can be developed at runtime making extending the shell very easy with a fast development cycle.

In summary, CRaSH is deployed in a Java runtime and allows you to interact with the JVM. With CRaSH, we can access the JVM using a shell. We can execute commands to see threads and classes, connect to available data sources and execute queries as if we were in the same place as the application!

These are the basic commands. However, a major strength of CRaSH is that you can make your own shell commands in Groovy (it doesn’t matter if you don’t know Groovy because Groovy recognizes Java syntax).

In our demo example, we will create a Groovy script that will read the information in the cache.

The objective is to control the demo application cache by connecting to the application JVM with CRaSH and run a display cache script. 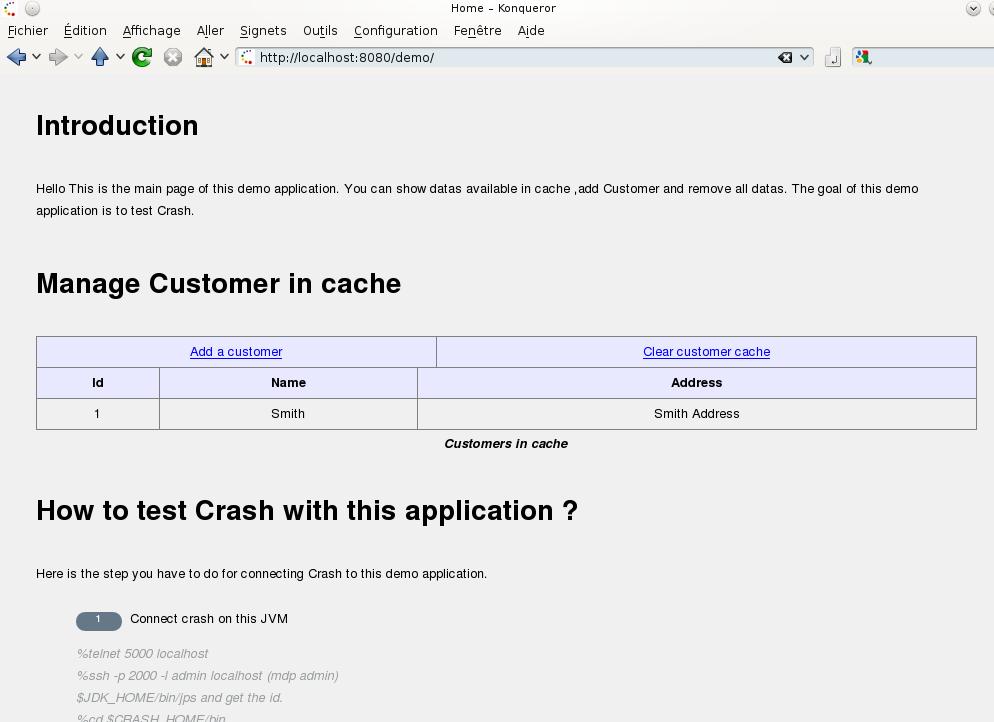 To display the data in our cache, we need a script. This script will be placed in the WEB-INF/crash/commands/ directory of our demo application.

Note: In this version (crsh.shell.embed.spring 1.1), it is mandatory to add scripts in the WEB-INF/crash/commands/ directory.

IV-C-1. How does this script works?

This script retrieves the customerComponent bean that exists in the environment. It is then possible to retrieve the list of customers by calling the getCache() method of the bean: List<Customer> lst = bean.getCache();

Then the script loops through the list of customers and displays their details.

This script will define a CRaSH command, which will be available in shell mode:

So to call showCache, simply type in the CRaSH shell:

Here is the code of the spring_cache command:

See Appendix V.E for more details on how to create a command. This command is written in Groovy. However, the syntax we are using here is the same as Java.

Integrating CRaSH into an application is very simple:

For this script to be available, it should be placed in WEB-INF/crash/commands/. Of course you can create as many scripts as you want and put them in this directory.

In some cases, it is possible to edit, delete or add commands dynamically. The command is then automatically reloaded!

Warning: CRaSH uses the Spring 3.1.1.RELEASE version but it should work with all versions of Spring.

This step is optional because you can connect directly to the JVM (see the appendix on connection modes).

On the other hand, if you want to use ssh or telnet modes, you only need to modify a bean (see the spring.xml file of the demo application).

In the example below, we configure Telnet access through port 5000 and we also add an ssh connection on port 2000 with the admin user.

We can connect to our application as follows:

You build the war file by:

We then deploy this war file in JBoss. The application is then available at http://localhost:8080/demo/. In the following section, we will see how to use CRaSH.

Using CRaSH is very simple. There are several ways to connect to a JVM:

In our example, we will use the ssh mode. Since CRaSH is embedded in the demo application with the ssh configuration (admin user and port 2000), you only need to have an ssh client to connect:

Once connected, you can type help for a list of the available commands: Notice that our spring_cache command is listed. To get the help for this command, enter: spring_cache.

To use this command, just type: spring_cache showcache. This command displays a list of the customers in our cache.

At startup, we loaded a user into our cache (see the appendix):

We can add another user into our cache, just click on “Add customer” on http://localhost:8080/demo/.

If we return to the home page after adding the customer, we will see two lines in our table:

Then, if we return to our shell, we see that the cache has been updated:

This section describes how we implemented cache management in the demo app for the following cases:

For this, we define a cacheManager with Spring in the sandbox.xml file:

We then use the cacheManager in our application to perform read, write and erase operations. We access the cache in two ways:

We will put a customer into the cache at startup. We defined a listener in our web.xml file:

This listener contains a context-initialized method into which we put our code for loading a customer into the cache.

V-C. Accessing the Cache via the Web Interface

It is possible to perform cache operations via the web interface. We define operations in the Controller that will call the caching methods that are in CustomerComponent.

This mode allows you to start CRaSH directly from the shell:

This starts CRaSH with its own JVM.

This mode is used to connect CRaSH to a local JVM. For a list of available local JVMs, use the jps command in the JDK:

To connect, simply pass the JVM PID to CRaSH:

CRaSH can be embedded in a web application deployed on an application server. This is the case for our demo application.

CRaSH also comes in the form of a war file, which is deployed on an application server. Thus, we can access the application server’s JVM and can for example connect to available data sources and execute queries.

There are several methods for connecting to CRaSH deployed ​​on an application server:

There are two ways to create a command:

In this case, put the code into the Groovy script. Here is an example of a clock command:

This method greatly simplifies the creation of commands. In this section, we present only the basic annotations needed to create a command. There are many possibilities for CRaSH commands. You can, for example, add completion and create result tables.

For more information, check the document on www.crashub.org.

Here is a command structure:

@Command: defines that a method or a class is a command.

We can also place this annotation above a method identified as a command. For example, for the JDBC connect method, we have: @Usage(“connect to database with a JDBC connection string”). So if we input:

We’ll get the following description:

There are also annotations to define the arguments (example: @Argument) and options, for example, @Option(names=[“p”,”password”]).

I hope you enjoyed this article and that you now want to use and learn more about CRaSH.

Thanks to Mickael BARON for his patience and the quality of his observations and Claude Leloup for his careful and diligent review. I also thank Julien Viet and Romain Linsolas for their reviews.

Thanks again to Damien Rieu for his great article. For more information and useful resources on how to use CRaSH with eXo Platform, head to the community website! You can also find the original article in French here.