Stay tuned and get our latest articles directly to your inbox. Enter your email address below:
Marwen Mema
Written by Marwen Mema On 30 June 2016 -
Tips & Tricks 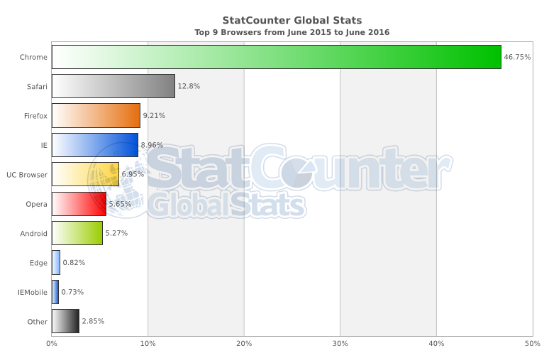 Open source is becoming standard for web and enterprise infrastructure software, and an increasing number of mainstream organizations in the IT world are actively embracing it. This is so much the case today that, whether you are a developer or a consumer, open source technology is something you are inevitably using every day, possibly without being aware of it. From some of the software you prefer to use to the websites you visit frequently, chances are that things would be different today had open source not been a reality.

In this entry, we would like to share with you a roundup list of some of the top open source software solutions that power a lot of the things you use today, followed by a brief outline of what open source means to eXo and what kind of active involvement we have with it.

According to StatCounter, Google Chrome continues to win the browser wars with a 46% market share over the past year, while Mozilla’s Firefox comes in third with one-tenth of the cake.

Chrome is based on Chromium, which is the open source project from which Google draws the source code that it uses to make Chrome. Firefox has been and continues to be an open-source-based browser as well.

If you happen to use one of these two browsers and you use your browser as much as I do, then you are in effect a daily user of open source technology.

Web server software provides the system that processes and delivers web pages to you as you navigate your way through the world wide web or use your favorite web apps—an important piece of the interwebs puzzle indeed. Our top open source software selections under this category are none other than Apache’s HTTP server and Tomcat (which is a web application server).

With over 50% of websites relying on Apache’s open source web server offering, the latter has been maintaining a firm lead in terms of the number of websites that rely on it for quite a few years now. And who is the runner-up in that popularity race? It is Nginx, another piece of open-source-driven software. 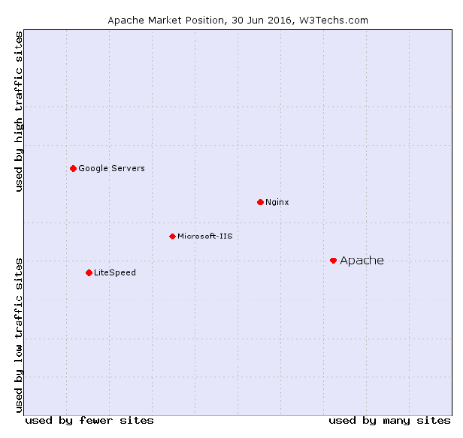 With its nearly self-evident status these days, we don’t need to delve into how important security is when it comes to running a serious website or browsing your favorite sites. So let’s dive right into what our pick is for this category.

OpenSSL provides an open source implementation of the Transport Layer Security (TLS) and Secure Sockets Layer (SSL). In a nutshell, these are cryptographic protocols that allows us to communicate securely over a network. OpenSSL is practically the most popular in its class, and that it’s open source speaks for itself.

Database software allows us to create databases and manage the information that is stored in them. Countless websites and software solutions rely on a database as a vital organ of their architecture. In fact, just to give you an indication of how popular and important databases and database management skills have become, take a look at which programming language is currently the most sought after when hiring developers: 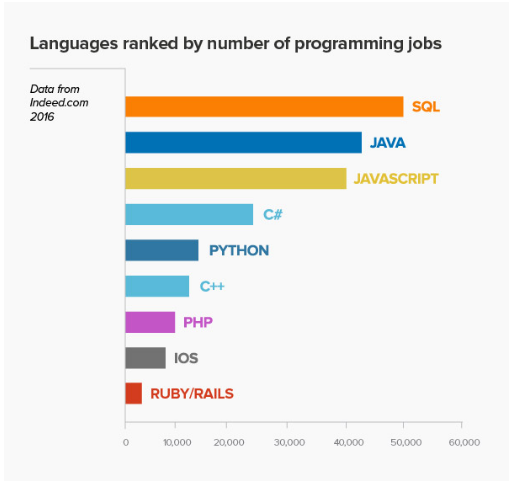 At the time of this publication, MySQL continues to be the second most commonly used database out there (right after Oracle Database). MySQL is a 21-year-old open source relational database management system (RDBMS).

Other open source names, such as MongoDB, continue to rise toward the runner-up position, while others, such as PostgreSQL, are maintaining their solid share of popularity.

Linux with its many open source distributions (some proprietary ones do exist, but they are an exception and not the rule) is the uncontested champ in this category. It is without a doubt the top operating system with an open source model.

While likely you are not using something like Linux Ubuntu as your computer’s operating system, suffice to know that it’s used a lot more commonly in the servers that run your favorite sites. So you are, in a way, still benefiting from its existence.

We have picked Twitter as a great example of this. This popular social media company’s active and continuous involvement in open source speaks for itself.

The good news is that it is far from being alone. Several other major internet companies today are huge open source contributors as well. Google, for instance, developed AngularJS which is the most popular JavaScript framework, contributed to the Linux kernel that later became Docker, and the list goes on.

eXo Platform has been open-source-driven since its inception 13 years ago, and we often like to share what we find to be the value of going open source with your intranet. eXo’s involvement with open source goes a little beyond that. Here is a list of open source projects that eXo either embeds and uses in its own platform or has created and is contributing to:

If you are not too familiar with open source, had doubts about its merit or did not know to what extent you are already using it, then we hope that you’ve discovered a thing or two from this article.

Do you have any thoughts or experience with open source that you’d like to share? By all means, let us hear them!

Rate this post
Related Posts
Don’t fail your intranet project: avoid these 4 co...
All of our Collaboration Platform Offers to Better...
Everything you need to know about the future of op...