Stay tuned and get our latest articles directly to your inbox. Enter your email address below:
Marwen Mema
Written by Marwen Mema On 21 September 2017 -
Business Solutions 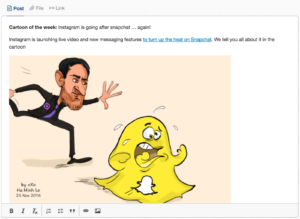 In an effort to strongly limit its adherence to non-standard technology, eXo Platform is built on and maintains a long-held commitment to open source and open standards. Under the hood, not only is it based on an open source code base in itself and complies with the Java EE specifications (Java Portlets, JCR, etc.), it also leverages several known and proven open source components.

This contributes to helping organizations avoid lock-in to one proprietary vendor ecosystem and better ensuring the tailoring and continuity of their IT operations.

We already had the chance to share our views on open source in general and why we think it’s good for everybody. In this little article however, we will instead give you a look into what third-party open source components are either built into eXo Platform or whose integration with eXo is supported.

The eXo Platform software is packaged as a deployable enterprise archive as defined by the Java EE specification. It is delivered as a ready-made package on top of either a Tomcat application server or a JBoss Enterprise Application Platform, the former being the more straightforward option.

Tomcat is an open source Java Servlet Container made by the Apache Software Foundation. It is the most widely adopted application and web server in production today.

JBoss is subscription-based software while Tomcat is free of charge. Both support server clustering, enabling an eXo Platform deployment to scale horizontally in order to serve large numbers of users (in the five or even six figures).

As can be seen here, eXo Platform supports several database solutions including both proprietary and open source ones. The latter are MySQL and PostgreSQL, both representing the most popular open source relational database management systems available today. They actually are the ones most used by our customers and most preferred by our service delivery teams.

Our chat feature on the other hand uses and requires MongoDB, a free and open source cross-platform document-oriented NoSQL database solution.

There is another article here in which the rationale for this choice is detailed. In a nutshell, this choice was about flexibility, performance and scalability in the context of a web chat application.

OpenLDAP is the most popular free and open source LDAP implementation.

The list of supported Single Sign-On providers on the other hand includes three open source providers:

GateIn was the result of a merge of two open source Java projects: JBoss Portal and eXo Portal. This collaboration took the best of both offerings and incorporated them into a single J2EE deployment with the aim of providing a portal framework addressing enterprise needs.

Today, GateIn continues to play the non-trivial role of the enterprise portal foundation in eXo Platform.

In eXo Platform, there are two kinds of search indexes: Elasticsearch and JCR (which leverages Apache Lucene).

ElasticSearch is the most popular open source search engine solution out there. It is cooked in Java based on Apache Lucene and released under the Apache open source license.

eXo Platform uses this powerful and highly scalable full-text search engine under the hood as its main search engine, powering searches such as for wiki pages, user profiles and spaces. It also facilitates search extensibility.

Apache Lucene on the other hand is relied on for indexing and searching of content (e.g. documents) stored inside eXo Platform’s JCR-based enterprise content management system. Lucene provides useful search functionality such as fuzzy searches for search keyword matching beyond exact matches and proximity searches.

CKEditor is an open source WYSIWYG text editor providing common rich text editing features directly inside your web browser. Some of its neat features (beside its being open source) include its full customizability and templatization (e.g. to properly fit the different use cases within a platform like ours), direct pasting from Microsoft Word, an extensive list of add-ons, etc.

This text editor is implemented in several areas in eXo Platform, including:

Here’s a neat example: we use it ourselves for openly sharing our product roadmap in our online community site. 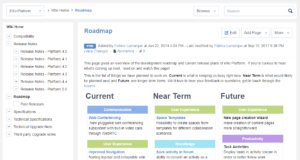 This wiki module leverages the open source wiki solution called X-Wiki. It is well-established in its field and provides features such as a no-nonsense rich text editor, wiki syntax, page templates and macros which extend its page editing capabilities beyond what a simple text editing can do.

These features help enable the use cases that a well-structured collaborative wiki can be ideal for, and that is why we at eXo choose it as the engine running our wiki app.

Related Posts
Top 5 Reasons to Go Open Source with Your Intranet
Chatbot: Why it is not AI?
Can Enterprise Data Privacy be Addressed by Open S...