Stay tuned and get our latest articles directly to your inbox. Enter your email address below:
Brahim Jaouane
Written by Brahim Jaouane On 11 October 2019 -
Cartoon 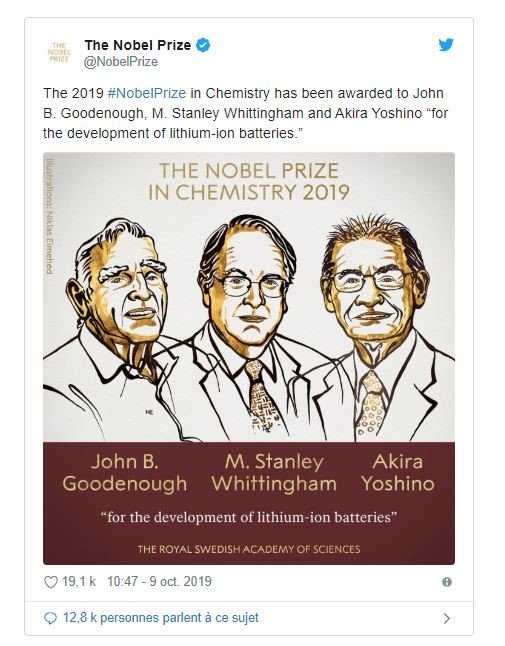 This year’s Nobel Prize in Chemistry honours John B. Goodenough, Stanley Whittingham and Akira Yoshino, who have all contributed to the development of rechargeable lithium-ion batteries.

There is a good chance that the device on which you are reading this article is powered by a lithium-ion battery. These batteries  increasingly power our world. They power not only the technology in our pockets, but also electric cars and even homes. The lithium-ion battery has only been around for about 30 years but it has helped change the world.

“They have created a rechargeable world,” applauded the Royal Swedish Academy of Sciences. The 2019 Nobel Prize in Chemistry was awarded to John Goodenough (USA), Stanley Whittingham (UK) and Akira Yoshino (Japan) for their work on the development of lithium-ion batteries.

Awarded with Stanley Whittingham and Akira Yoshino for his work on these revolutionary batteries, American John Goodenough became the oldest person to win a Nobel Prize at the age of 97. The Swedish Academy was keen to reward the work of this American–Anglo–Japanese trio and their contribution to the development of the modern technosociety.

“This type of light, rechargeable and powerful battery is now used everywhere, in phones and computers and electric vehicles. It can also conserve significant amounts of solar and wind energy, paving the way for a society free of fossil fuels,” explained the Royal Swedish Academy of Sciences.

Lithium-ion batteries are everywhere: Their creators have just won the Nobel Prize in Chemistry

“One of the important things in society is to free ourselves from our dependence on fossil fuels. If we could make an electric car as practical and cheap as an internal combustion engine, we would halve CO2. emissions from the road,” Goodenough told the New York Times in 2017. He is still working to discover the next generation of batteries in order to make this dream come true.

For the time being, the lithium-ion battery remains one of the essential pillars for building a carbon-free future.

According to the Nobel Committee, the trio of American, British and Japanese “have created the conditions for a wireless and fossil fuel-free society, thus bringing the greatest benefit to humanity”. And for that, they qualify for the prize.

They did it by iterating each other’s work to keep on pushing the boundaries in what is clearly a good demonstration of teamwork.