Stay tuned and get our latest articles directly to your inbox. Enter your email address below:
Feriel Mhalla
Written by Feriel Mhalla On 31 August 2016 -
Cartoon of the Week 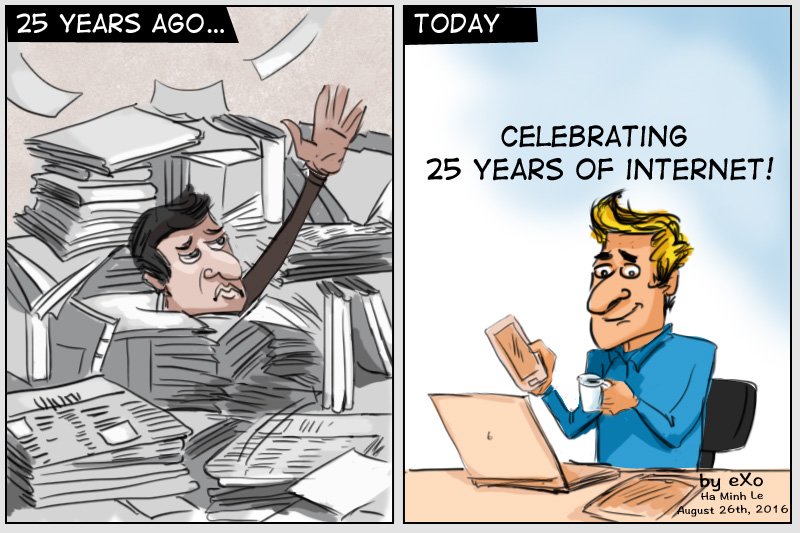 25 years ago, the Internet was shown to the world for the first time.
It was a revolutionary invention that paved the way for information transfer on a massive scale. The least we can say is that Internet has changed our world and our existence right down to the smallest details, forever.

Weirdly enough, if it wasn’t for Facebook’s communication, the Internet’s 25th anniversary would have fallen through the cracks. Thanks to the social network, this event was highlighted and widely celebrated. Internet got to blow out its 25 birthday candles like a rock star!

It is important though to realize that the Internet was not born in 1991 but in the late 60’s. What Facebook, Twitter and the others have celebrated is the web, that large network of websites, which was made public 25 years ago.

Usually, we think that the Internet is the web and vice versa. But the Internet is actually the technology and it allows us to do much more than just surf the net. Online chats, downloading and other online services are also an integral part of the Internet. On the other hand, the web consists of only those pages searchable from an URL and through a browser.

So what happened on 23 August 1991? For the first time, the web, which contained only a few interconnected pages, was made available to the public.

However, the birth of the web dates back to 6 August 1991. Its father? Tim Berners-Lee, the scientist who created the Internet.
The web then became the public service you know, use and abuse every single day!.