Stay tuned and get our latest articles directly to your inbox. Enter your email address below:
Feriel Mhalla
Written by Feriel Mhalla On 24 June 2016 -
Cartoon 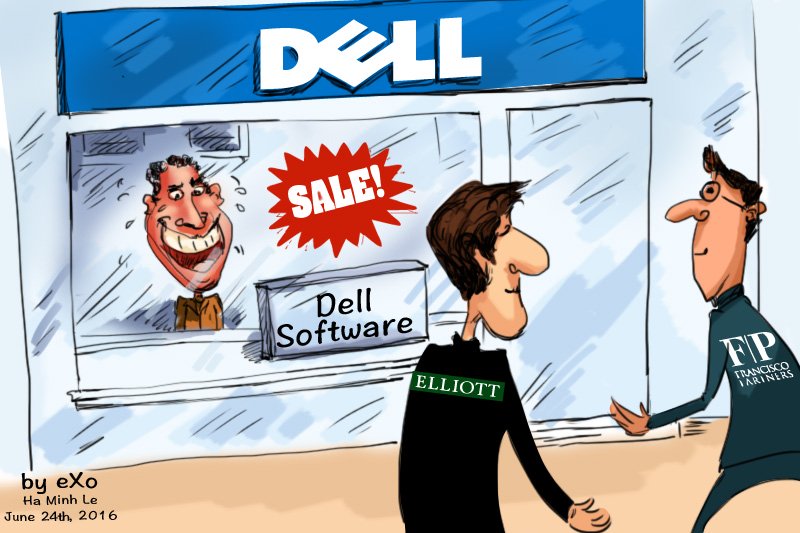 Rumors about the sale of Quest Software and SonicWall have been circulating for a while… But it is now official. Dell has decided to sell Dell Software Group, its division dedicated to software, to the investment fund Francisco Partners and the venture capital firm Elliott Management. A definitive agreement between the three parties was announced in an official press release on June 20.

Seeking money to fund its $67 billion EMC acquisition, Dell should be able to cash more than $2 billion, information not confirmed by the Texan company yet.

This transaction will help to lower the $49.5 billion debt necessary to complete the $67 billion EMC buyback.

This sale includes, in particular, Dell’s IT asset management solutions business (Quest Software) and its data security company (SonicWall). On the other hand, Dell is keeping Boomi, a business unit within Dell that specializes in Cloud-based integration, API management and Master Data Management.

Since announcing the acquisition of EMC , Dell has engaged in several divestments that are essential for financing the deal, which is based mostly on indebtedness. In March, the Japanese NTT Data Corp acquired Dell’s consulting division for more than $3 billion.

It has to be noted that its competitor, HPE, has sold its service business to CSC.

Michael Dell’s company has also launched SecureWorks, its specialist cybersecurity subsidiary, on the stock market. That way, he was able to leverage $112 million.

Michael Dell, who took his company out of the stock market to transform it far from the pressure of the financial markets, promises to unveil his strategy once the EMC acquisition is totally closed. If he is selling his own software, the future together Dell-EMC will be strongly present in the software market through companies such as Pivotal and VMware, subsidiaries of the world leader in data storage.