Stay tuned and get our latest articles directly to your inbox. Enter your email address below:
Nouha Blagui
Written by Nouha Blagui On 10 February 2017 -
Cartoon 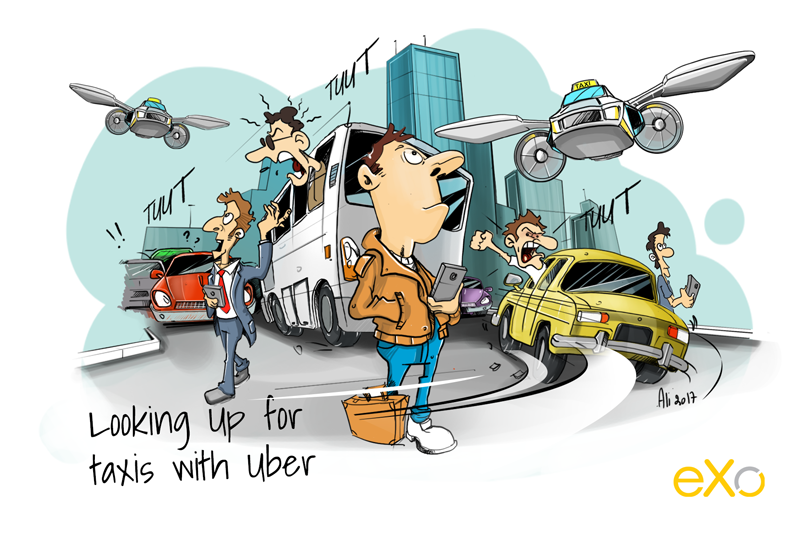 Remember when we were kids, we dreamt of having flying cars so that we could move quickly and catch bad guys? Well, perhaps our inner superheroes can stop dreaming now and can start acting as Uber has announced it is developing flying cars.

Apparently Uber hasn’t lost its child-like heart and this is one of the reasons why the company always seems to be thinking one step ahead of the others.

So, Uber will develop flying cars. And who else would you think would consider such a think? I’m talking about Nasa of course!

Uber recently hired Mark Moore, a former engineer at Nasa, to working on Uber Elevate. The project aims to develop a vehicle capable of vertical takeoff and landing (VTOL).

According to the Verge, Mark will help smooth out many of Uber Elevate’s hurdles. That Uber turned to Mark Moore is not surprising as he produced a research paper tracing the feasibility of a short-range, electric-powered VTOL aircraft in 2010.

“We’re excited to have Mark join us to work with companies and stakeholders as we continue to explore the use case described in our white paper”, said Nikhil Goel, head of product for Uber’s advanced programmes.

A prototype of the flying car does not exist yet due to several challenges: from noise levels, to battery life and air-traffic restrictions, and the least we can say is that such projects are goofy and currently way too ambitious. But are they that hard to achieve for companies like Uber? I’m not so sure. Uber is not done yet testing driverless cars  but it’s clearly already thinking about the next decade ahead and future trends.

Let’s consider the challenges it will have to face though. Besides complying with battery technology, efficiency performance, reliability and safety, airspace regulation will certainly be one of the biggest challenges that Uber will have to face. Airspace is highly regulated, so it will take strong lobbying efforts to add a bunch of personal aircraft into the mix.

All this work also means that costs will be high! Building a car costs billions, I’ll leave it to your imagination to think how much it would cost to develop a VTOL-capable aircraft car.

Uber believes though that, in the long term, VTOL vehicles can become an affordable alternative, especially if they cut commuting times.

Does this mean that people will no longer opt for driving cars? And what about those with airsickness? Will they have to walk?