Stay tuned and get our latest articles directly to your inbox. Enter your email address below:
Khemais Menzli
Written by Khemais Menzli On 8 May 2018 -
Tutorial 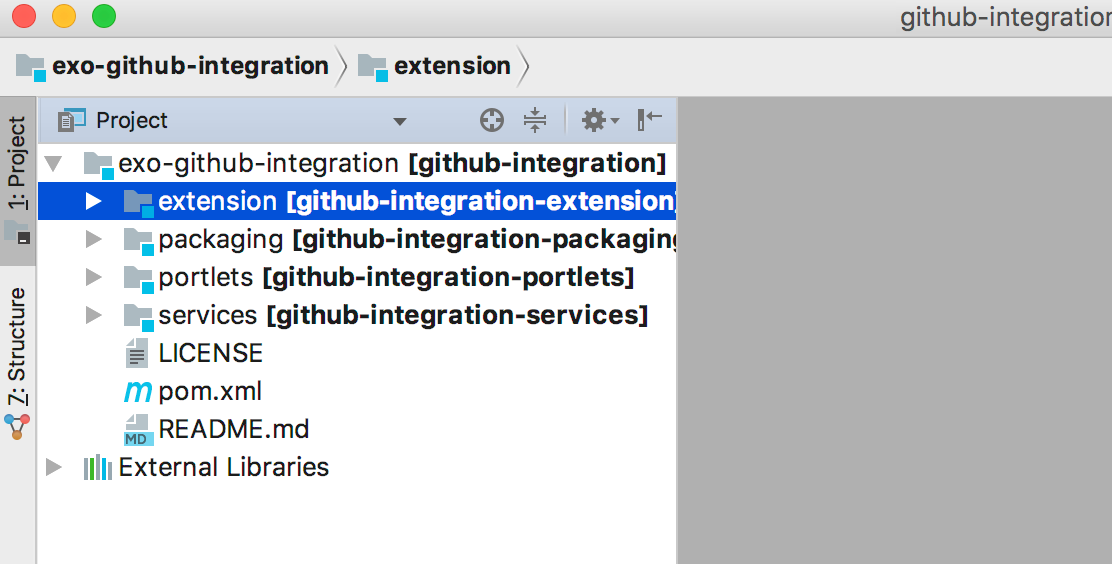 It’s pretty hard to keep up with all the new JavaScript libraries and frameworks. Three years ago, eXo introduced AngularJS to boost front-end development. Now there are add-ons to show how we can use eXo Platform with AngularJS, like the staging extension. There has also been an integration with ReactJS.

In this blog post, I’d like to share my experience using VueJS with eXo as a front-end solution. You’ll learn how to build a simple Vue.js portlet with eXo back end.

You can find the sample code base in GitHub. This is a Maven-based project, so it should be easy to import and run as-is.

Well, simply because until now eXo hasn’t provided a ready-to-use sample with the current JavaScript trend known as Vue.js.

No, seriously, of all the frameworks and libraries I’ve worked with over the years, one thing about Vue.js that stands out for me is the documentation. It’s very detailed and easy to follow, covering multiple-use cases and all the various options, where applicable, for each of its built-in methods.

I decided to dive into Vue.js because a lot of good things are being said about it on the web (perfs, components, productivity, etc.).

Let’s start with the basics

I won’t describe in detail how Vue.js works under the hood – that’s not the goal here. Instead, I’ll try to give an overview of some basic concepts.

Vue.js uses a template file containing both the template body (HTML tags) and a script section that acts as a controller. The following example is a simple template to give you an idea of how things are structured.

The data() function is used to set up default data for the initial rendering of the component, and data binding within the View side is provided by the mustache pattern : {{}} or property v-html.

The created() function is similar to Reacts componentWillMount life cycle method and is the best place to perform the init process before the rendering phase.

The methods() function is where you define functions that will be used next in the View side, following the pattern @{DomEvent}=”youMethod”.

This is just a taste of what’s possible with Vue.js. You can see more examples in the Vue.js documentation.

To show you how to integrate Vue.js into the eXo stack, I decided to develop a small eXo add-on (a web app) to list all commits performed within a GitHub project.

Before we can start building our app based on Vue.js, we need to set up a few things:

eXo add-ons are mostly web apps that we deploy on top of eXo Platform to bring new capabilities to the platform or to customise some default configuration. To find out more, read the eXo documentation on how to create a portal extension.

In the current example, I’ll use an eXo extension with the following structure:

I’ll skip all the details of how to configure the extension – you can find these in the eXo documentation. However, to display the GitHub integration app within the home page, I used an eXo dynamic container, which allows us to display the portlet on the homepage, as explained in the official documentation.

We’ll focus on the integration of Vue.js 2.0. We assume our readers have played around with Vue.js and know the basics of the eXo ecosystem.

Wait, what is an eXo portlet?

A portlet is a web app that delivers its own resource files within a portal context. eXo Platform allows developers to create and deploy their portlets in different flavours:

For this example, I chose the Juzu framework as an MVC solution.

Juzu is a web framework based on MVC concepts for developing apps. We’ve chosen Juzu because we already have a set of Juzu apps deployed within eXo out of the box, but you don’t need to use Juzu for this integration. You should be able to easily adapt this tutorial to your favourite web framework as it allows you to separate the front-end and server-side development. Our example uses Vue.js as a client-side framework and Juzu as an MVC framework.

The aim here isn’t to describe Juzu. If you want to master Juzu, we have a guide for that. Our goal is to explain the required steps for developers to integrate Vue.js into the Juzu portlet.

Vue.js claims to be a progressive JavaScript framework. Though the core library of Vue.js is quite lightweight, developers have available a large ecosystem of tools and libraries to enhance it.

Installing Vue.js can be done in many ways:

In our case, we installed Vue.js as an AMD module using the latest stable version. 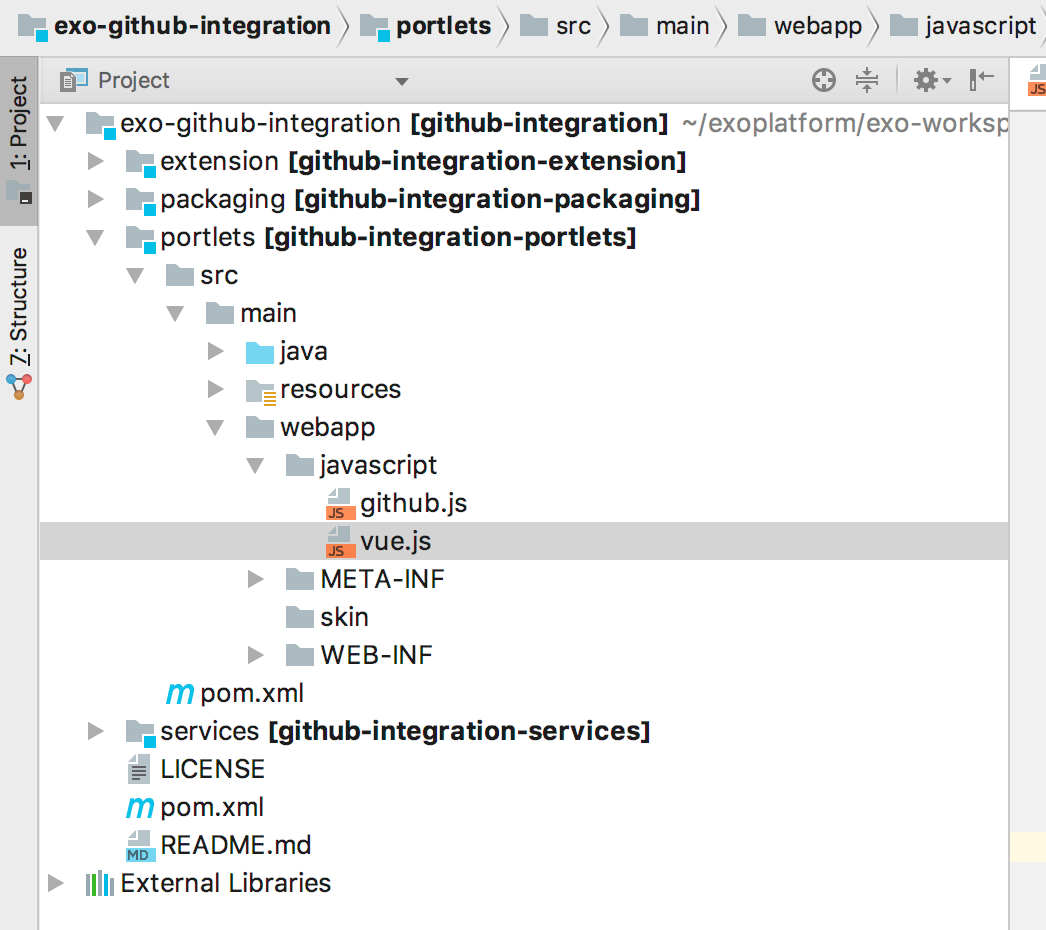 You can create the project described above or you can use this example.

How to configure JavaScript modules

AMD (or asynchronous module definition) is a JavaScript pattern that defines the way a library is loaded as a module, as opposed to a global object, that is available only to another module that ‘requires’ it. AMD is often used in eXo to improve client-side perfs. Read more about AMD in this document.

Use Vue.js as a module

To use Vue.js library, developers have to add the following configuration to gatein-resources.xml:

Add a Vue.js module as a dependency to your portlet

As seen above, Vue.js is already configured as a module within eXo Platform. To use it in an app, developers need to declare it as a dependency in the same gatein-resources.xml:

As you may have noticed, the configuration above brings a set of javascript libraries and injects them as AMD within our application when it is rendered by the portal:

Using Vue.js within your code implies managing a Vue object instance through several phases, including observing data, initialising events and rendering. You can register life cycle hooks that will be employed in specific phases.

In the next example, we will use Vue.js to monitor a Git repository and then display the five most recent commits for each branch.

Note: developer should adapt the javascript variable apiURL to his own github repository

The code for the main page is in the index.gtmpl file in the templates folder of the portlet. Here it is:

When the browser creates a Vue instance represented by the div with the GitHub identifier, it loads the HTML and performs the binding between the model and the view.

Bravo! You’ve successfully bootstrapped your own Vue.js app. Keep at it!

The first step is to build your project, which means generating required artefacts to roll up into the eXo server. Building an eXo add-on is pretty simple. From the root folder, build your project by running the following Maven command line:

The expected output is a zip file called github-integration.zip: 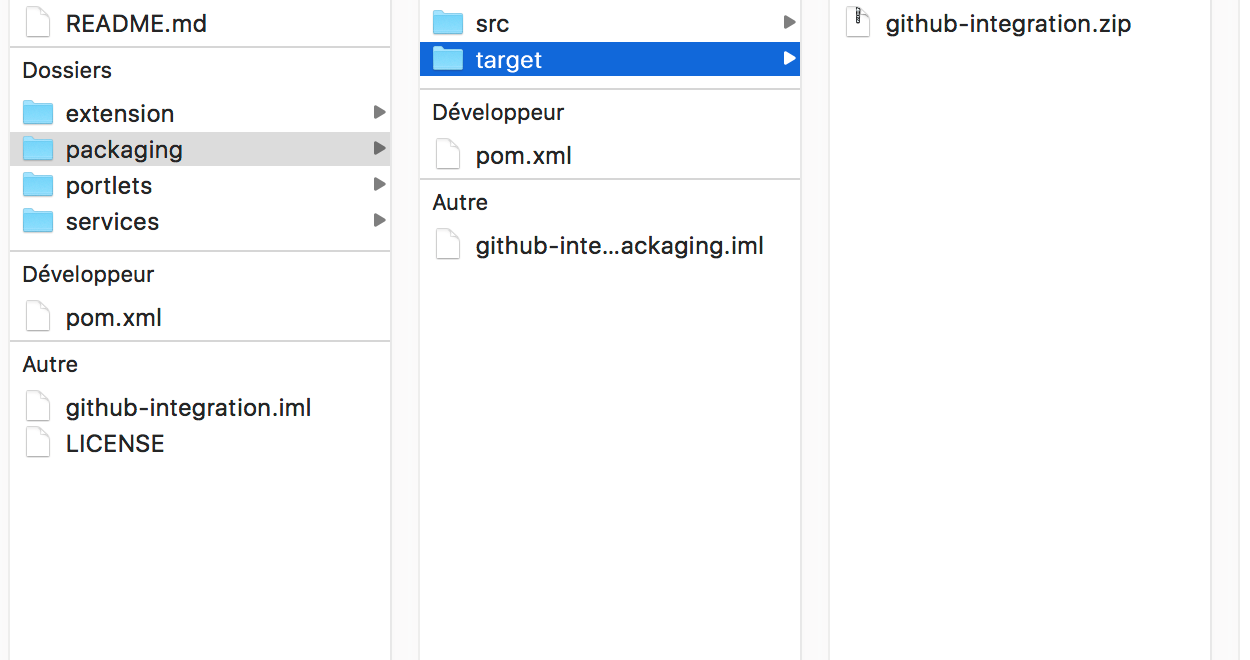 Deploy artefacts into the eXo server

Once the build process is complete, you need to deploy all the generated artefacts in the corresponding folders of the eXo Tomcat server. The first step is to unpack github-integration.zip somewhere on your file system, then copy and paste its contents into the following location:

Start the server by running the following command line on the root folder of your eXo Platform instance (depending on your operating system): 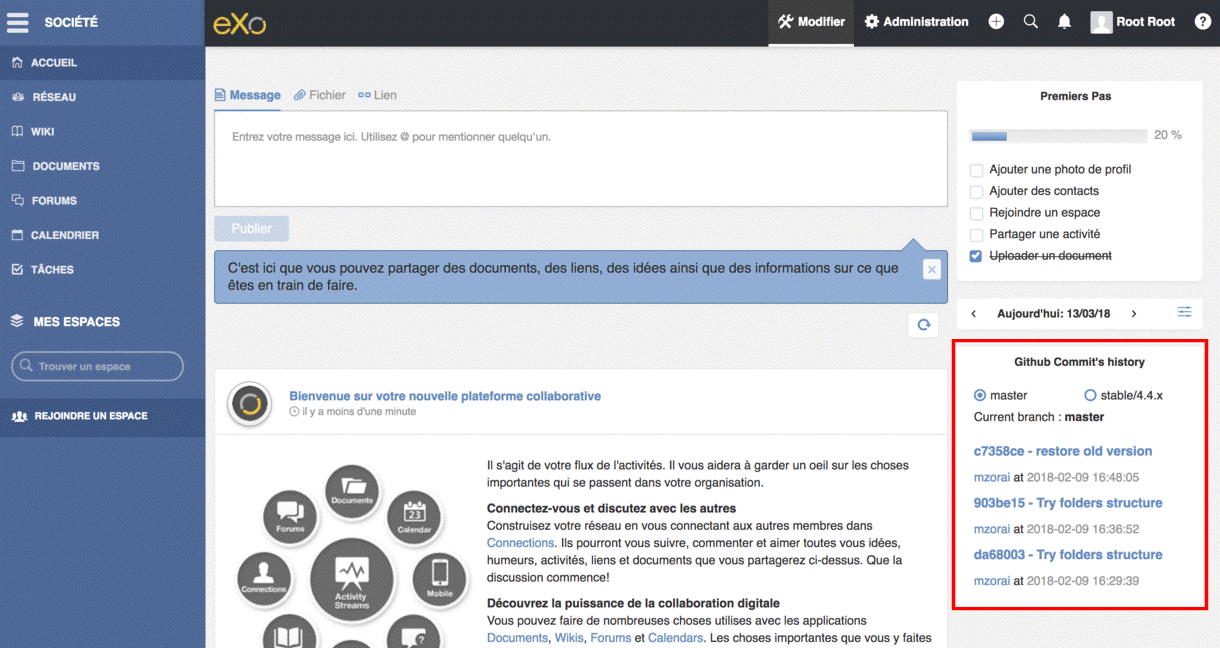 In upcoming posts, I’ll show you how to use Vue.js life cycles to build more reactive portlets – so stay tuned.

Rate this post
Related Posts
New Javascript minification disabling option in eX...
Step-by-step integration of eXo Platform SSO via S...
Step-by-step guide on how to use the OnlyOffice ad... 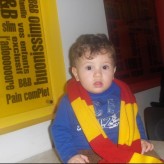 I am a technical lead at eXo. with over 12 year of experience in Web & IT technologies. I'm here to help you develop your next idea using eXo stack.