Stay tuned and get our latest articles directly to your inbox. Enter your email address below:
Fares Laroui
Written by Fares Laroui On 24 September 2019 -
Tips & Tricks

Whether you are a tech enthusiast or just a regular person with limited to no interest in technology, you have probably heard of blockchain and cryptocurrencies one way or the other. Despite having been around for the last decade, blockchains still receive mixed reviews. Some believe that the technology is a game changer with huge potential, while others have invested out of fear of losing out on a lucrative return, and a big portion of people and businesses (mainly banks) have dismissed the technology altogether, labelling it as a fad.

However, blockchain has stood the test of time and began to gain interest from businesses across different industries, like the finance and insurance industries. Its growing applications – many believe – may ultimately impact our everyday lives and change the way we work.

In this blog post, I will answer the following questions:

Blockchain is a public ledger that uses a chain of blocks to store different kinds of records. It has key benefits for businesses, such as decentralisation, persistency, anonymity and auditability. The technology has been used for various applications so far, from cryptocurrencies and financial services to healthcare and public services.

How far has blockchain come?

In an article written for Forbes entitled “Blockchain Adoption: How Close Are We Really?”, Loi Luu, CEO and founder of KyberNetwork, tried to situate blockchain on “the innovation curve”. In his view, the issue should be examined from two different perspectives: investment and technology.

In terms of investment, blockchain has reached the “early majority” stage, mainly due to the willingness of businesses and the general public to invest heavily in the technology, which has seen its capital reach more than a half a trillion dollars in 2017. However, from a technological perspective, experts believe blockchain is yet to reach its full potential as a number of concerns still need to be overcome, such as its scalability and an apparent lack of qualified blockchain developers.

In an article they wrote for Harvard Business Review, Marco Iansiti and Karim R. Lakhani examined the evolution of blockchain from a different angle. They considered blockchain as a foundational innovation with prospects to create new foundations for both economic and social structures and developed a framework detailing the four stages of adoption. The framework consists of two dimensions (novelty and complexity) and four stages: single use, localization, substitution and transformation. 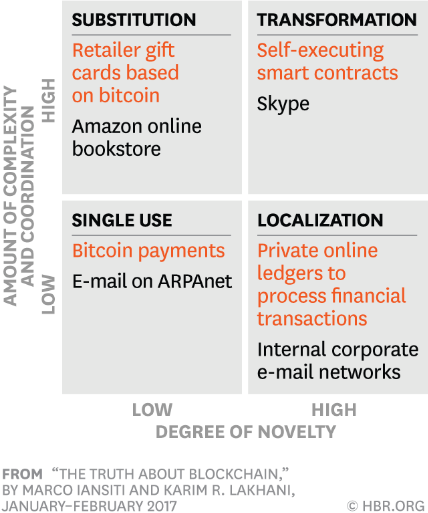 The article concludes that blockchain is still in the localization stage. Although a number of big organizations around the world, namely JP Morgan, Goldman Sachs, Facebook and others, are investing in the technology, its use is limited and it is yet to have a significant impact on social and economic systems.

Use cases of blockchain in enterprises

One of the main reasons why there is so much interest in blockchain is the fact that it is virtually unhackable. With the use of encryption, each user has a public key and a private key that he/she can use to validate and access different transactions and records. The enhanced security offered by blockchain technology has made tech companies consider introducing it to support knowledge sharing and record keeping.

Introducing blockchain to store data in educational and healthcare institutions, for example, can allow authorized users to access sensitive data securely thanks to methods that are not provided by other digital or cloud sharing platforms. It also reduces the number of intermediaries handling input, while bringing transparency to operations.

Blockchain technology is being progressively considered by businesses to enhance engagement levels and retain employees. The main use cases revolve around combining gamification mechanisms with cryptocurrencies to create an internal economy. Users can gain tokens based on their work and contributions, which they can eventually spend on perks or activities made available by the HR department.

A number of start-ups have emerged lately with innovative ideas targeting the HR field. These new initiatives cover the whole scope of HR operations, from recruitment to payroll management. The ability of blockchain to facilitate transactions, eliminate intermediaries and promote transparency is contributing to the growth (although not that rapid) of these solutions.

One example of such an idea concerns payroll management with start-ups like Etch, ChronoBank and others that allows companies to automate payroll and to pay their employees faster using blockchain.

With organizations across different industries investing in blockchain, It is safe to say that this technology is here to stay. Although still in its early days with applications yet to reach mass adoption, blockchain is showing great potential and is expected to grow bigger in the upcoming years.

If you are interested to know more about blockchain in general, how we introduced it to our digital workplace and other related news, make sure to visit our blog and subscribe to our newsletter.

Related Posts
Why we created our own cryptocurrency at eXo
Frequently Asked Questions of 2019
How to improve your digital workplace through user...