Stay tuned and get our latest articles directly to your inbox. Enter your email address below:
Feriel Mhalla
Written by Feriel Mhalla On 11 December 2015 -
Cartoon 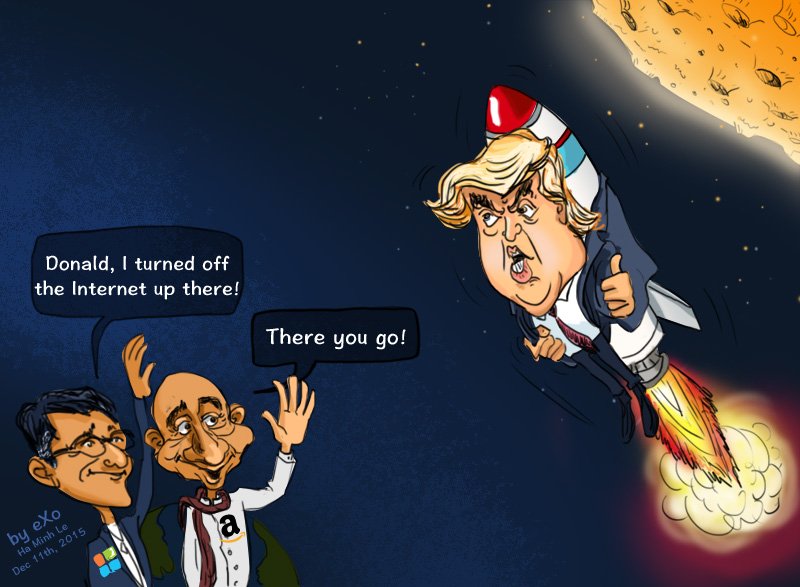 Donald Trump started off as a funny, quirky character, but over the months, he has just become…dangerous. Piling up extreme stances and statements against Mexicans, Muslims and others, Trump is getting skeptical looks instead of giggles now. In short, he dislikes and condemns anyone who is not completely American, white, and straight—oh, and rich!

He recently took his ire out on Amazon’s founder and CEO, Jeff Bezos. Trump claims Bezos used his acquisition of The Washington Post’s as a means of not paying taxes and not making money for his companies.

“The @washingtonpost, which loses a fortune, is owned by @JeffBezos for purposes of keeping taxes down at his no profit company, @amazon.
— Donald J. Trump (@realDonaldTrump)

At least Bezos has done some interesting, innovative stuff, like creating Amazon and founding Blue Origin to develop space tourism.

After Trump’s mudslinging, Bezos, who never tweets, broke his silence—and it was funny.

“Finally trashed by @realDonaldTrump. Will still reserve him a seat on the Blue Origin rocket. #sendDonaldtospace” — Jeff Bezos (@JeffBezos)

Bezos never mentioned bringing Trump back, though. It looks like Trump, who wants Bill Gates to shut off the Internet, has scored himself a one-way ticket to space for Christmas!