Stay tuned and get our latest articles directly to your inbox. Enter your email address below:
Nouha Blagui
Written by Nouha Blagui On 3 March 2017 -
Cartoon 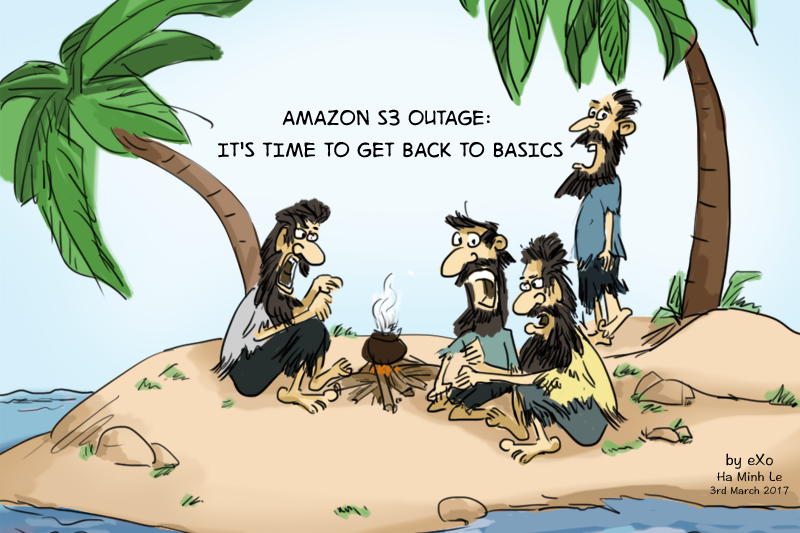 Amazon’s S3 web-based storage service experienced a breakdown on tuesday, leading to a wave of panic.

This led to the service being either partially or fully broken on websites utilizing Amazon’s Web Services. Not only that, but a number of apps and  IoT products that rely on the technology were also affected during the downtime.

What can someone possibly do during the five-hour breakdown? Catch up with family? Say hi to aunt Katy, Anny? What’s her name already?

Anyway, Amazon Web Services (or AWS) is becoming so powerful that when it experiences such a widespread issue, it takes down a large chunk of the Internet with it.

This breakdown must have come as quite a shock to the large number of companies who have begun to rely on Amazon for its cloud-based services, partly due to its perceived reliability.

Well, maybe they should revise the definition of “reliability” and reconsider their choice to opt for only one cloud-based service.

Dave Bartoletti, an analyst in the cloud industry, sees that this could be a wake-up call for service companies to assess redundancy in their data storage strategies: “ You can store your data in multiple regions or you could build a site that doesn’t rely [solely] on S3 as its only storage”, he explained.

I think this is a wake-up call for the whole of humanity once we realise that we’ve just lived through the 0.0001 probability of downtime out of Amazon S3’s 99.9999% uptime. Maybe, it’s a sign that it’s time to start figuring out the meaning of our life when we have just seen how much we  fully depend on technology.

We just needed a little breakdown to start freaking out and realising how much tech-dependent we are.

The only escape from such an existential crisis is, I guess, to start pretending to like people and to start socialising. Because when the Internet is down for good next time, we’ll be only left with people.