Stay tuned and get our latest articles directly to your inbox. Enter your email address below:
Maxime Greau
Written by Maxime Greau On 8 May 2017 -
Tutorial 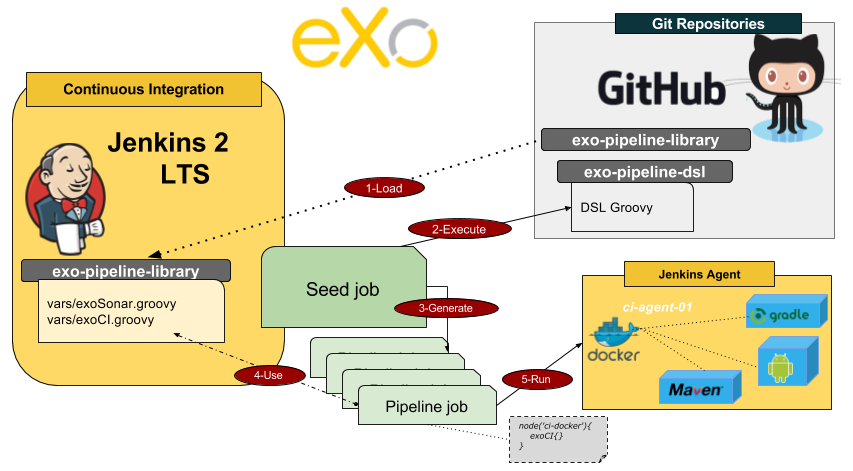 A year ago at eXo, we decided to build all our projects in Docker containers.

In this series of articles, we will tell you our story of how we upgraded more than 350 Jenkins “standard” Maven jobs to Pipeline as code on our Continuous Integration servers, using Jenkins 2 and Docker.

This is a good opportunity to revisit the problems we encountered and the solutions we adopted, as well as to examine some best practices around Maven/Gradle/Android builds in Docker containers, all managed by the Jenkins Pipeline as Code pattern.

As with all important technical migration, we did it step by step. The 3 major steps were:

The following diagram represents the workflow for these steps: 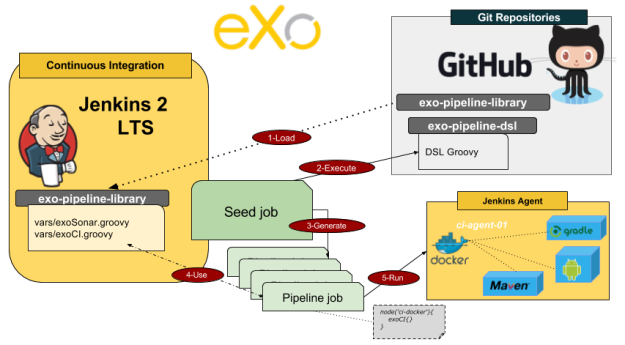 In this article, we will explain the context (why we did it), and the first step of the migration towards creating your own CI Docker images.

eXo Platform is built upon open-source and open standards. It adheres to the the Java EE stack and leverages many open-source components.

We have to manage many builds on our CI servers for a variety of reasons, which we can divide into several themes:

As the first step we have multiple git repositories for all the components required to create a distribution package for eXo Platform: 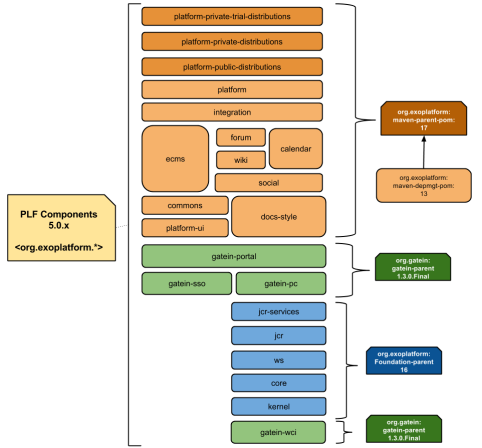 We used a Git Workflow, based on a branching model. All eXo projects are required to follow this model; 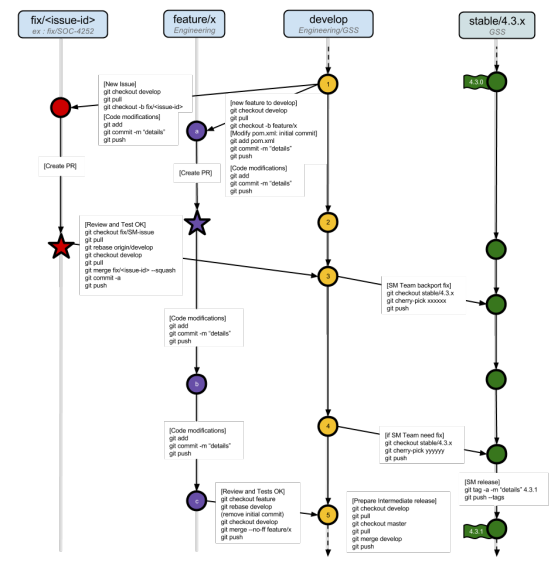 We build projects with the JDK6, JDK7 or JDK8, and Maven 3.0, Maven 3.2 or Maven 3.3 versions. The native Android application is built by Gradle.

Remember how to create Jenkins job via the UI?

Even if Jenkins 2 has benefited from the many efforts to enhance it, it’s always painful to create a new Maven job via the UI, as you can see below:

“Jenkins DSL and Pipeline jobs with Docker to the rescue!”

As a result, we have had to manage a lot of builds via the Jenkins UI and many tools in several versions (Maven, JDK, etc.) on CI agents and development laptops.

Finding this inefficient and painful, we decided to find a solution to automate and manage it in a different way.

The container (Docker) technology combined with the emergence of automation tools layered onto Jenkins with Pipeline, and the efficiency of the Job DSL plugin, appeared to be the ultimate solution in the eXo context.

Step1: Create your own Docker Images

There are important requirements to be aware of when creating your own Docker images in general, and builds in particular.

Choose a distribution base image

All our CI agents are managed via Puppet and are based on the Ubuntu distribution, so we decided to use a lighter Docker image based on this distribution: the baseimage-docker.

This was a good compromise between a very small image like Alpine, which resulted in problems related to JDK installation, and the official Ubuntu Docker image, which was too big.

Who hasn’t had test failure due to encoding issues? It works on your Linux machine, but it fails on your colleague’s laptop running Windows.

Thus, it’s mandatory to define a locale to ensure that all developers will have the same behavior, whatever their operating system, and that it will be compliant with the CI server configuration.

“…take care of running your processes inside the containers as non-privileged users (i.e., non-root)” is one of the most important best practices from the Docker security guide.

In the Jenkins context, it’s important to create a dedicated CI user that will fit the uid:guid of the user used by Jenkins on your server agents.

Indeed, when Jenkins will execute a Pipeline job, it will have to mount the workspace and other required folders into the Docker container.

For example, Jenkins will execute the following command on the server agent:

You willl notice that we define the EXO_CI_USER_UID variable with the Docker ARG instruction. This is important for the developer experience, which we will explain later in this series of articles.

In a Dockerfile, the ENTRYPOINT instruction is an optional definition for the first part of the command to be run. So both ENTRYPOINT or CMD instructions, specified in your Dockerfile, identify the default executable for the Docker image.

The best way is to combine both of them by using CMD to provide default arguments for the ENTRYPOINT.

In the earlier version of the Jenkins Docker Pipeline plugin, Jenkins didn’t use the –entrypoint option when starting containers, so the command was:

In that case, if your Docker Image declared an ENTRYPOINT as startup command, Jenkins was not able to use your image.

That’s why we added a custom script in our Docker Images, as a workaround, which allows one to execute Maven as a startup command, but also to execute the cat command and other commands executed with an absolute path:

In the latest versions of the Jenkins Pipeline Docker plugin, this problem has been fixed, to allow use of the –entrypoint option so that the ENTRYPOINT instruction is always overridden:

Use inheritance to avoid code duplication

We have created and continue to create Docker images to cover our entire Build Stack. Currently this list contains:

As you can imagine, there are not many differences between all those images, so we have created CI base images at several levels to be able to avoid code duplication as much as possible.

The diagram below shows how those images are organized: 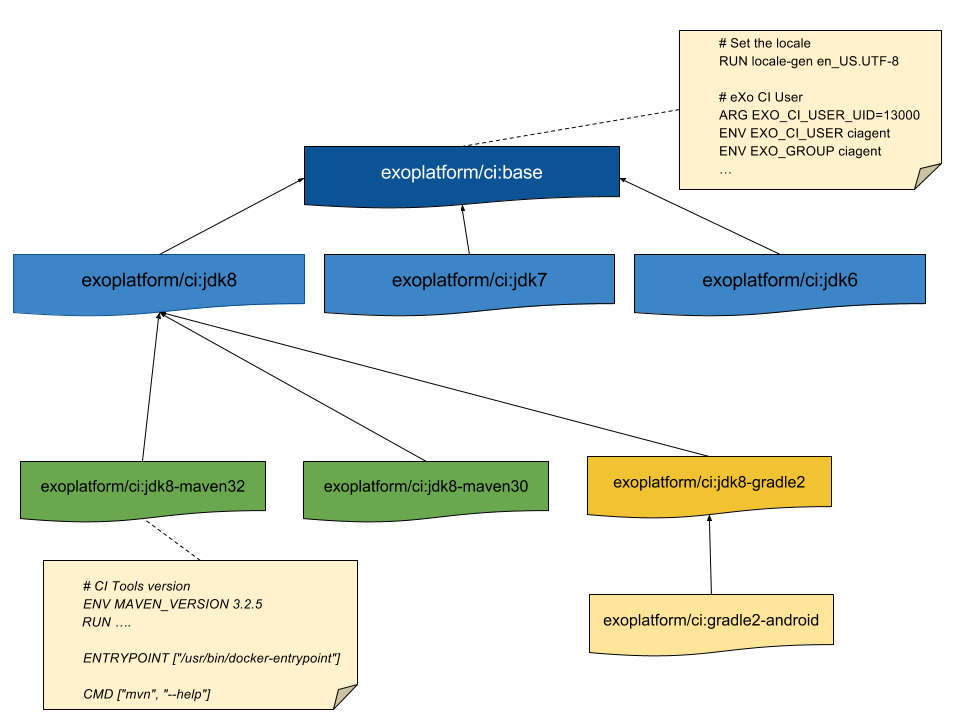 Below is an extract of the Dockerfile for the exoplatform/ci:jdk8-maven33 CI Image. You can see that there are only Docker instructions related to the Maven installation, since all other configurations have been done in the inherited images (define locale, create user CI…).

As explained before, we combined ENTRYPOINT and CMD Docker instructions to be able to run all Maven commands easily in this container:

We also add a custom script, to be able to run the cat command and commands other than Maven by giving the absolute path to the command:

Finally, you will have noticed that we defined the M2_REPO and MAVEN_OPTS environment variables as Docker ENV instructions with all important parameters having default values, which can be overridden by the -e option in the docker run command.

As with other source code, you can create tests suites for your Docker files and images. For the eXo CI Docker images, we use Goss via dgoss.

The first step is to create a YAML file to describe what you want to test in your Docker container. There are some examples online that can help you to create this configuration file, but it can be also be generated from the goss command line.

For example, say we want to check that some Maven configuration files exist in the container. We want to test that the mvn –version command is compliant with the Maven and JDK versions installed.

Then to execute those tests, it is a simple matter of executing the dgoss tool:

If you are interested in using or testing these Docker Images, you will find:

Feel free to give your feedback about this.

Now that we have created Docker Images for all our Continuous Integration stacks, we will explain in the next article (Part 2) how to use them on your laptop, whatever your operating system. Stay tuned!

Rate this post
Related Posts
Manage projects within eXo Platfom
Step-by-step integration of eXo Platform SSO via S...
Step-by-step guide on how to use the OnlyOffice ad... 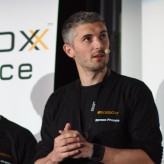 I'm the software factory manager at eXo. I'm responsible for all software factory services (Jenkins CI, GitHub, Nexus, Sonar...) and the eXo release process. I help to make the eXo developer experience better by simplifying and automating as much of the process as possible. Passionate about IT and open source, I contribute to open source projects in different ways (speaking at conferences, writing blog posts...). Also, I have written a book about Apache Maven 3.