Stay tuned and get our latest articles directly to your inbox. Enter your email address below:
Nouha Blagui
Written by Nouha Blagui On 30 December 2016 -
Cartoon 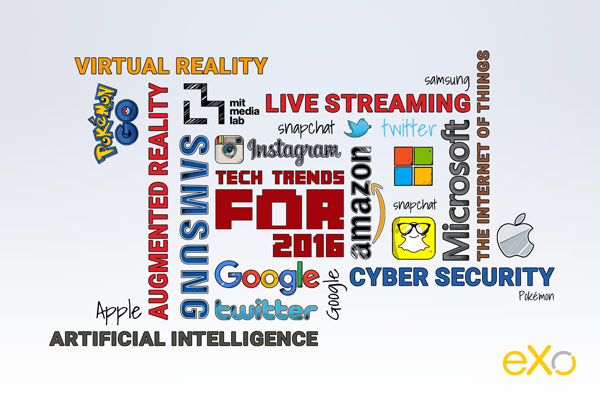 Technology surrounds us, pervades our daily activities, and affects how we live. Needless to say, 2016 was the year of augmented and virtual reality, artificial intelligence, IoT, and much more.

The strategic technology trends of 2016 pushed many leaders and executives to think twice before establishing digital strategies. They calculated the risks of being affected by technological advances and determined what they needed to do to maintain their businesses and stay the course. For these calculations and determinations to be accurate, we need to look back at events from the past year. We don’t need to brag about our victories or stress about our failures but instead predict the forms that digital technology will take in the coming year.

We worked hard to create a summary of the biggest tech influencers of the year who used innovative technology.

Virtual reality (VR) will remain one of the most important developing technologies, and it will continue its significant growth. According to Mashable, 2017 will mark the beginning of VR’s transition from a curiosity into a tangible tool.

Augmented reality (AR) arrived on mobile devices, overlaying images of the real world with additional graphics or information. AR was used in gaming with Pokémon Go, and it is expected to have additional successes in 2017. However, AR’s use was not limited to entertainment. The Dutch police also used an AR system to inspect and investigate fresh crime scenes.

In 2016, we became more used to having digital interactions with machines. There were some interesting technologies to watch in 2016, such as self-driving cars that don’t require any human input; Google’s AlphaGo, which achieved a remarkable victory over Lee Se-dol; and even assistants on smartphones.

In the upcoming year, we can expect robots and AI to take over some manufacturing jobs, and AI will just keep getting smarter!

The internet of things

The other area in which we saw some fascinating research developments is the internet of things. Our desire for connection and interconnectivity led Google to apply for a patent for a device that can be directly injected in the eye.

In addition, Samsung developed the Artik IDE platform, which allows software and application developers to make devices communicate even if they weren’t meant to talk to each other.

Now that it’s possible to link physical objects, we’ll start taking for granted the ability to tell our coffee machines at home to prepare a drink as soon as we arrive even from miles away.

There’s no doubt that cybersecurity will continue to be a main focus for the IT industry in the future. The more we trust machines to respond and react to our demands, the more security issues will amplify our fears of being hacked and attacked.

Therefore, many companies have used hacking tactics to strengthen their information security systems. The U.S. Department of Defense did this when they launched their Hack The Pentagon operation.

Thanks to live video streaming, companies can come up with many creative ways to get things done.

In addition, real-time platforms will certainly be critical to brand growth. As the saying goes, “Adapt or die.”

We can’t discuss strategic technology trends without thinking about technological elites. As technology advances, I can’t wait to see what these popular brands will bring us this year. Will the endless Apple/Samsung and Microsoft/Apple battles finally end with a winner? Will we see new confrontations between companies?

One thing we can be certain of is that these tech giants will still take advantage of our whims and desires, leading us to run after shinier, brighter, newer things.
Stay tuned for more fun cartoons!